The birth of Erichthonius is one of the most interesting stories of the Greek Mythology. Hephaestus, the God of Fire, fell in love with Athena, the Goddess of Wisdom, and wanted her to have his child. Athena was the eternal Virgin so that was not possible. So his sperm fell to the ground and Gaia (Goddess Earth), conceived and gave birth to Erochthonius. After birth Gaia handed over the baby to Athena, and Athena is known as Erichthonius’ Mother.

Athena was also the Mother-protector of Athens, so Erichthonius became an earliest king of Athens. Athens, protected by its goddess mother,  became the strongest of the cities of the ancient world. 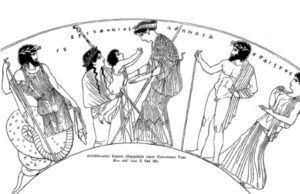 Gaia hands over Erichthonius to Athena

In the wise ancient mind the notion of the ‘Mother’ was very broad and all encompassing, to include not only the one who conceives and gives birth to a child, but also the one raising a child, as well as the protector of the city. Thinking about it there are so many more expressions of the Mother’s role: We have Mothers-to-be, Mothers of angels, Aunts-Mothers, Mothers of beautiful healthy pets, step-Mothers, Mothers of science and research projects, Mothers of successful businesses, Mothers of winning teams, Mothers of people in need, Mothers/ caretakers of older parents, and many more.

All these Mothers have one thing in common: Their ‘children’ are above themselves.

Newer What ring size am I?
Back to list
Older The Luxury of Sustainable and Ethical Choices – Earth Day 2021
Shopping cart
close